I teach H.G. Wells sometimes.[1] It strikes me now that when Wells’ time machine is visually reproduced, it almost always has a

spinning apparatus. Most of the images, like the one shown here, have some (primordial, Jungian, spiritus mundi) approximation of a drop spindle. The disk at the back spins and the traveler negotiates time.

I’ve been digging out my old lessons and my old implements for about a year now. I’m never not astounded that, “I still have that!” It’s been a bit like time travel.[2] Even as I actively look through my boxed up youth, things are passively finding me. My son brought me an end-blown flute from who-knows-where in my basement and asked me, “How do you get this thing to make sound?” I’d had that thing since I was in seventh-grade. Where had it been? When he put it in my hand, I was transported. 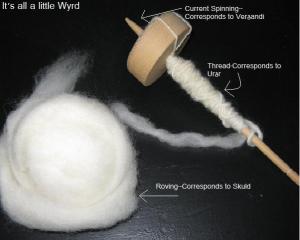 This picture shows a drop spindle with wool already spun on the shaft and some roving unspun. The past is the pre-spun wool. It’s already been spun. Your ancestral past is the yarn deep, deep underneath.[4] When you come into a family, you inherit what has been spun.[5]

There has to be a “getting the shaft” joke here somewhere.

The present is what is currently being made (not well illustrated here since it’s kinda something you have to see in motion.) And the future is that near-nebulous mass that has yet to take form. The future is not predestined.

In my argument about Oedipus as a Heathen-drama, I explain:

Fate is a predestined fortune. . . . there is a set order to the cosmos and that order cannot be altered. Karma is the give-and-take between actions and consequences over a series of lifetimes. Wyrd is between. . . .Wyrd agrees that there is a set order, but that, as individuals, our interaction with that order is what determines our lot. But there’s the extra added bonus of ruin. At some point, you may make a choice that absolutely ‘seals your fate.’ No backsies. No re-do. No exit strategy. No plan B. Sometimes we can screw the cosmic pooch, and end up ‘doomed.’. . . [W]e may formulate our Wyrd. . . [b]ut, Wyrd is sticky. If a bullet’s got your name on it, you’re fucked. . . .

Let me put it this way, the most popular metaphors for Wyrd involve spinning and weaving. If you have any experience with thread, sewing, weaving, crocheting or any of those handicrafts, you know that if you have weak thread or if you have balding fabric, your final project will eventually tear, no matter what. At that point, it’s ‘doomed.’ But if you could go back to the place in time when the thread was being turned out or when the fabric was being woven and make a different decision, one that prevented the weakness in the thread, one that prevented the baldness, the ‘fate’ of the project will be different. (Bear in mind that in this metaphor, you are the shit who made the thread and fabric.)

But, today I am meditating on what it means to “go back” and undo your pre-spun Wyrd. Is that kind of “time travel” possible? Let’s see.

At the base of Yggdrasil is Urðarbrunnr, or Urð: The Well of Wyrd. This well is tended by  the Norns, Urð, Verðandi and Skuld.  It’s easy to think of them as “past, present, future,” but that tends to make the future seem set. This is not the case. Skuld corresponds more to the English would “Should” as in “what should be,” not “what will be-no-matter-what.” There is a sense of “due” to the word as well. As in “that which must be paid.”

Really, a better translation is “what has been,” “what is becoming,” “that which, in all likelihood, unless someone screws said cosmic pooch, and unless someone has inherited a sick ørlǫg, should happen.

If you thought Wyrd was a hard concept to get your “I’m used to thinking in terms of Karma” brain wrapped around, it’s about to get weirder.

Close your eyes and imagine The World Tree. Oh, not a Heathen? Here’s a picture.

Imagine water falling from Yggdrasil; some of it will fall into the Well of Wyrd but only a small portion of it.[6] So, most of what happens doesn’t matter too much; only some things fall into Urð. Once those occurrences fall into the well, they go to the bottom and settle; this is ørlǫg. These layers of phenomenon form the foundation of the Well of Wyrd: our fate. As ørlög builds up, it changes the way the water is likely to fall, like Dr. Malcolm’s explanation of chaos theory in Jurassic Park.[7] As the foundation of Urð changes, some outcomes become more probable than other outcomes. Given enough ørlög, some outcomes become inevitable. (See “Screwing the Cosmic Pooch” above.) Keep in mind that ørlög is neither positive nor negative. You can accumulate “helpful” ørlög as well as “detrimental” ørlög.

For the most part, Heathens embrace personal responsibility. You’ll never hear The Bad Witch say, “X is bad for me because my mother . . .” or “It’s my father’s fault that I . . . .” Don’t get me wrong, I understand the ørlög my parents laid at the bottom of the well. I don’t idealize my parents. But even when my ways part with my parents’ ways, I still honor them. In uncovering my ancestry, I have some, um, primordial ooze, to be sure. But they and their ørlög are urð, what has passed. I am verðandi, that which is becoming; and need to be concerned with skuld, what should be. I need to spin my own Wyrd instead of constantly examining my predecessors’ (on account o’, I have children who will inherit my Wyrd spindle and my ørlög). More on that in a minute.

But, then again, sometimes a good deal of “inherited” ørlög lays at the bottom of Urð. And, barring profound acts of heroism that few of us even face the opportunity to enact, ain’t nothin’ in the world you can do about it. The extent to which you control your Wyrd has to do with the profundity of ørlög you (and your ancestral family) have accumulated. And you cannot travel back in time to undo your ancestral ørlög.

The time when we should examine our predecessors’ urð is when we find ourselves perpetuating detrimental behaviors. At these moments, we should just breathe for a moment, recognize that we are in verðandi, that moment which is becoming, and begin to unwind our ørlög. While there isn’t much we can do about what’s wound on the spindle seven-layers deep, we can revisit the recent past and straighten out the Wyrd we’ve wound in our own lifetime.

As long as we are living and breathing, there’s always a chance to straighten it out.

But even when our ancestral ørlög is knotty seven-layers deep, we don’t chuck the spindle and invent a new one. We don’t take someone else’s thread and start winding it onto our skein. And we sure as hell don’t ignore it and keep spinning over it. The most important thing we can do is find the kinks in the thread (triggers that “make” me do X like The Bad Daddy or Y like the Bad Momma). Find the kinks in your thread and carry on conscientiously.

Maybe we can’t time travel to change our familial past, but we can, knowing where the kinks are, make better decisions about our “now.”

Don’t confuse this with the happy-joyness of all those shite self-help-through-positive-thinking-power-of-now bull-spittle philosophies out there today. (Oooh my badness, do I have a thing or two to say about this Rhonda Byrne/Eckhart Tolle crapola. But first I must read Bright-Sided: How the Relentless Promotion of Positive Thinking Has Undermined America, by Barbara Ehrenreich. Don’t wanna say something you can read elsewhere.) You can’t smile ancestral ørlög away—it takes work.

This post is part of a year-long project. Rowan Pendragon’s The Pagan Blog Project; “a way to spend a full year dedicating time each week very specifically to studying, reflecting, and sharing . . . .    The project consists of a single blog post each week posted on prompt that will focus on a letter of the alphabet” (http://paganblogproject/). [8]

[1] Aside from Morris Jessup, there doesn’t seem to be a lot of talk about “real” time travel in the twentieth-century. But there was this video that circulated on the websternet about a year ago of Charlie Chaplin’s 1928 silent film, The Circus, where a woman presumably walks past the camera talking into “a cell phone.” This was used to “prove” that there is a truth behind time travel—and that Hollywood soundstages had very lax security in the late-20s. I’m sure you’ve seen it. If not, go Google it—I’ll wait.

[2] I found a binder with my notorious gel-pen notes in the margins and was suddenly twenty-two again. I could smell the dank stone of the carillon which blotted out the pollution of Chicago’s South Side. Ah, but I had all of my sense about me rather than being the credulous child I was at twenty-two. (Don’t we all say, “Ugh, I wouldn’t be twenty-two again to save my life!” All while we wish that we had our youth restored. Twain was right, you know. Youth *is* wasted on the young.)

[3] This past spring I started making simple ritual garb for the would-be store, Roots, fit The Wyrd Sister. As a nod to my Heathen roots, I called the line, “The Wyrd Spindle,” on accout o’ the drop spindle has always been a metaphor for Wyrd.

[4] I was profoundly touched by the comments some of you left on my Roots post. Some of you shared stories in personal messages and emails. Our roots, like the great Yggdrassil itself, reach into the primordial ooze. I really want to talk to you about some things I’ve been putting together while meditating on Ginnungagap, but that’ll have to wait as it is a huge side-track.

[5] For an Anglo-Saxon Heathen back-in-the-day, to be (re)born outside of your (former life’s) tribe, to be (re)born as a stranger (to the family of your former life), was a fate worse than anything. One does not willingly trade in one’s kindred.

[6] This is part of why the Norns laugh at large egos. If you believe that everything relates to you—if you believe all of the water falls into your well—then you are a fool. Plus, think of how monumentally screwed you would be.

[7] Chaos isn’t chaos unless you are too close, folks. Step back one or two paces; chaos is hypersymmetry.

[8] Holy guacamole, y’all; can you believe we are nigh 10 months (40 posts!) into the Pagan Blog Project? I’ve met many of you through Rowen’s project and have read some fabulous posts by writers I may never have run across otherwise. I’m proud to have been part of this from the beginning. So proud in fact that I can’t wait until next week to announce to you all that I am hosting a blog project of my own for 2013. Let’s keep this between you and me for now–don’t tell the other 1200 readers, OK?