I think I’m going to have to make a new category: “Ask The Bad Witch.” I get really thought-provoking questions from newbies, seekers, adepts, and friends. I find myself answering them and thinking, “Gee, that would make a great post.” So feel free to fire away with questions. (I will disguise all names with my characteristic panache!)

This first one comes from Eager to Learn! in Alabama: “What is a good thing to do to cleanse your mind and the space around you?”

TBW says:  I assume you mean the metaphysical space around you? 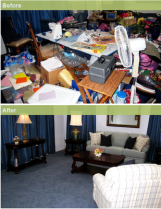 Obviously, a physically clean space is helpful. Meditation is always good. As a matter of fact, until you are able to go into an altered state of consciousness at will, meditation is a must.

You can “imagine” taking inventory of your mind and spirit. I suggest a system like you see on those “Clean House” shows. Three boxes – toss, keep, donate. If you find that you are spending too much psychic energy navigating a “crowded house” you will want to clean some of that out.[1]

Toss: Get rid of the old psychic hangers-on that don’t do you or your practice any good.

Remember that, as Pagans – not Christians bound by a sense of guilt and need for eternal atonement, we live in the *now*. Our magick is in the now, our practice is in the now, our whole being is in the now. To hang on to regret or grudges or resentments ties us only to the past. Plus, if you are who you are today because of the series of events that brought you here, what business do you have questioning the Almighty Spirit about the method by which you were brought here – to the now?

You should also toss all that shit to the curb that sucks more from your life than it gives. Like vampires (see below).

And after you go through this system of mental inventory – keep good psychic hygiene.

Donate: Now, I’m not suggesting that you pawn off your useless psychic-hand-me-downs to Joe on the street. But TBW is a fan of recycling, reusing, repurposing.

So here, donating your psychic sluff-off is the equivalent to things like teaching others not to make the same dumb-ass mistakes you did. Or making a mental shadow box of things you can’t afford to repeat. Use it as a reminder not to make those same dumb-ass mistakes a second (or third) time. Remind yourself that people don’t really make material change all that often (damnit) and that the scorpion always – always, always, always, fricking always – stings the frog at the end of the fable.

If you can’t tell, The Bad Witch has a veritable collection of these mementos. Always one to try to see the best in people and always charitable, I have an assemblage of scorpion stings.[2]

The farthest question comes from Handsome Ozling:  “Where do you recommend I go to learn more?”

TBW says what TBW always says: As far as learning more, again I don’t know where you are in training and I really hate to step on another mentor’s toes. Go to some of the online esoteric and hermetic libraries and ask your mentor what s/he recommends you read.

My next question comes from Student Writing an Extra Credit Assignment on Satanism (No Shit) in Alabama: “What the heck is a psychic vampire?”

TBW says: You know. Everybody’s got one – or more. Those people who suck the life out of you and never give anything in return. The ones who are always there with their hands out but when it comes time to fill your palm, they are nowhere to be found. Yeah, them.

From Enthusiastic Newbie in Illinois: “What can you tell me about ‘Celt’ Traditions?” (Likewise, I’ve been asked for specifics on Manx Traditions, so I’ll combine the two.)

TBW says: A lot of American Pagans are interested in “Celt practice.” But before you get too far into it, you have to ask yourself, “What does this mean to you?”  What we call “The Celts” were/are a vast and various people after Rome vacated Western Europe. (Before Rome got there is a different story altogether.) Maybe reading a little bit about Celtic history will inspire you? At any rate, it couldn’t hurt.

Are you interested in Druidry? Heathenism?  Anglo-Irish traditions?  Fairy Faith? Picti-Witta? The list goes on and on.

On the Isle of Man, I think they have some of the last vestiges of the “real” old ways (they were one of the Western cultures never Romanized). Although, I should note that I recently read an article that argued that the Manx hold on to old ways but don’t necessarily understand them as being Pagan or even ancient. I’ve heard about “broom dancing” and such.

In Celtic Traditions you must – must – must realize that you are likely going to be working with a neoPagan or Reconstructivist religious path. See my earlier post for more info. It’s valuable, but you have to take what it is, not what you want it to be.

Maybe the closest thing we have is Fairy Faith. I’m *really* not sure about that – the Manx are pretty insular, as most island people are (and imagine, they are an island off an island nation).

I honestly don’t have a good answer for this one. My folk are Bavarian, Argylle-Scot, and SE Native American (Mvskogee and Tsalagi). . Boy was I wrong. [4] If anyone has anything for Eager and Enthusiastic, drop me a line and I’ll pass it on.

This is the best I can do.

Another question from Eager to Learn! in Alabama is: “What exactly is a kitchen witch?”

TBW says: A kitchen witch is a practitioner that works in practical ways around the house.

Speaking of which, it’s Thanksgiving and I need to go baste my bird.

[1] While I’m not usually a proponent of eliminating chaos, this is one area where I think a beginner should practice fastidiousness.)

[2] Maybe I should just start collecting the stingers from now on?